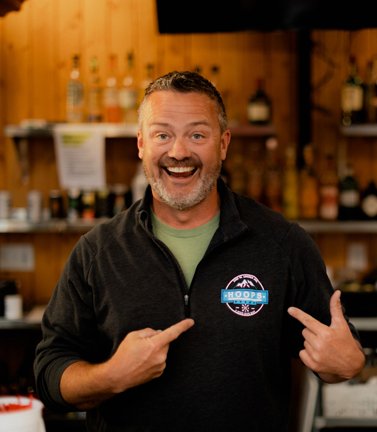 Longtime bartender Fred Gilmour IV, became part-owner and operator of the club in January 2018 and renamed it back to the previous “Hoops”.  Fred starting bartending at Hoops in June 2001.  He has continued bartending through multiple owners and now has the opportunity of owning it himself.

Fred has a big vision for this popular neighborhood bar and started to make changes in many aspects of the bar beginning in early 2018. When you walk into the newly remodeled bar, there are multiple things that will catch your eye.  It might be the glass doors that allow light into the building during the day.  The popular fireplace is still located in the middle of the room. But, if you look, you will see the new beautiful blue rocks that will make sitting by the fireplace a cozy nostalgic afternoon with friends.

The menu will change multiple times during the year adding seasonal items during the spring and summer months.  Fall and winter months to include warm and hearty dishes like homemade soups and Cheese Zombies. There is always something new to try, right?

Let us talk about the showpiece facelift of the patio – Fred’s proudest addition. Hoops now has a 3,800-square-foot terraced patio that can host up to 200 people. The large outdoor stage features a trussing system for sound and lighting of the live music events Fred is planning. Hoops will also host karaoke nights, movie nights, and acoustic musicians on the patio during spring, summer and fall months.

Read about the 2019 Remodel of the Club
“Hoops Returns With Upgraded Indoor, Outdoor Spaces”

A great neighborhood bar … for many years!

Longtime bartender Fred Gilmour IV, becomes a part-owner of the club and renames it Hoops.

From 2010, owned by Lew Miller, who later changed the name of the club to twenty one 03 – showcasing the address.

From late 60s to February 1975 owned by George and Gene Cahoon.