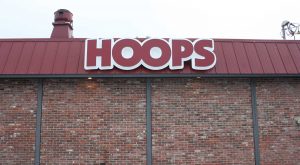 Hoops is back and better than ever.

They’re also going back to the name that made the establishment a mainstay on the Yakima bar scene since the early 1990s.

“People kept calling us Hoops even after we changed the name in 2012, so we figured it just made sense to go back to what worked for so long,” said Fred Gilmour IV, who owns the restaurant and bar at 2103 W. Lincoln Ave. along with Lew Miller.

“We have a lot of regulars, so we wanted to do something nice for the customers who have been supporting us for all these years,” he added. 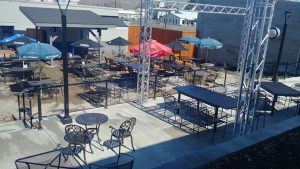 The centerpiece of the project is a 3,800-square-foot fully enclosed patio, complete with landscaping, stone accents and a terrace.

The private event space, located directly behind the former Party Palace, can now accommodate up to 200 people, which will allow Hoops to host large gatherings. The patio will also provide ample seating for customers during regular business hours.

“We have a been seeing standing-room-only crowds for our music nights, so we decided we needed to make our outdoor space more comfortable and inviting,” Gilmore said.

In addition, they installed a large auxiliary beer cooler out back, freeing up more space inside the remodeled kitchen. The kegs are now hooked up to a Glycol Chilling System that keeps beer at an ideal temperature at all times. 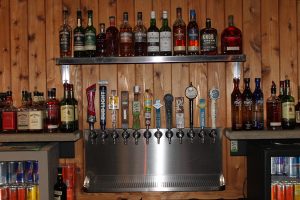 The system is designed to limit beer loss (due to excess foam) by about 30 percent.

“Now, our pours will be as good as everyone else – and they’ll be the perfect temperature every time,” Gilmour said.

The bar and restaurant area have also seen significant improvements. For starters, the old-fashioned low-rider bar that was installed back in the 1970s – when the place was called Little John’s, and later, The Office – feels more like a traditional bar.

The contractor, Specialty Finishes Northwest, also knocked out a wall between the bar and the kitchen, raised the ceiling and installed glass doors in the entryway.

Gilmour said the interior improvements have been planned for a while, but the patio was more “spur of the moment.”

“Jason Dodd (owner of Specialty Finishes NW) told us he had a few weeks to do something, so we decided to take him up on it,” Gilmour said.

“We had a surveyor come out and determine how much we could expand the patio, and it turned out to be about three times larger than before. It’s a massive amount of space, and we think it will help us stand out.”

Gilmour and Miller plan to host karaoke nights, movie nights, and acoustic musicians on the patio. They hope customers will continue to use the space even when winter hits.

“The stone and concrete work are beautiful, and the landscaping is going to make it even better,” Gilmour said. It’s a space where people are going to want to hang out.”

Dodd and his team began work in early October and expect to finish the project before the end of the month. The landscaping work was scheduled for last week, but the patio has been available for the clientele to use since it was completed.

In fact, the business barely had to close during the renovations. The staff was serving drinks until 2 a.m. on October 17 and construction work began at 6 a.m. the same day.

The contractors worked around the clock so the bar could reopen as Hoops on Oct. 18.

“Business has been going really well lately and we didn’t want to turn people away,” Gilmour said. “There’s been a lot of buzz in the community from people wondering what we’re doing to the place. We’re not totally done, but we’re open for business.”

Gilmour said that the increase in business over the past couple of years has given him reason to believe Hoops is going to be even more popular than it was 20 years ago, when a former Yakima SunKings owner took it over.

“The time is right to let Yakima know we’re here,” he said. “We’re the best – and cleanest – dive bar in town. We’ve got plenty of parking, and now, we’ve got this amazing outdoor space. We think our customers are going to like it as much as we do.”